Brought to you by the Esoteric team and High Council of Shangri La, we are proud to announce The Quest of the 13 Crystal Skulls…

Embark on an interactive adventure spanning the entire site of Esoteric 2020! Complete the quest of the 13 Crystal Skulls of Atlantis to access a Secret Area. Scattered at major points around the festival site, follow the treasure map included in the festival guide to locate them all, and unlock the Utopia within! 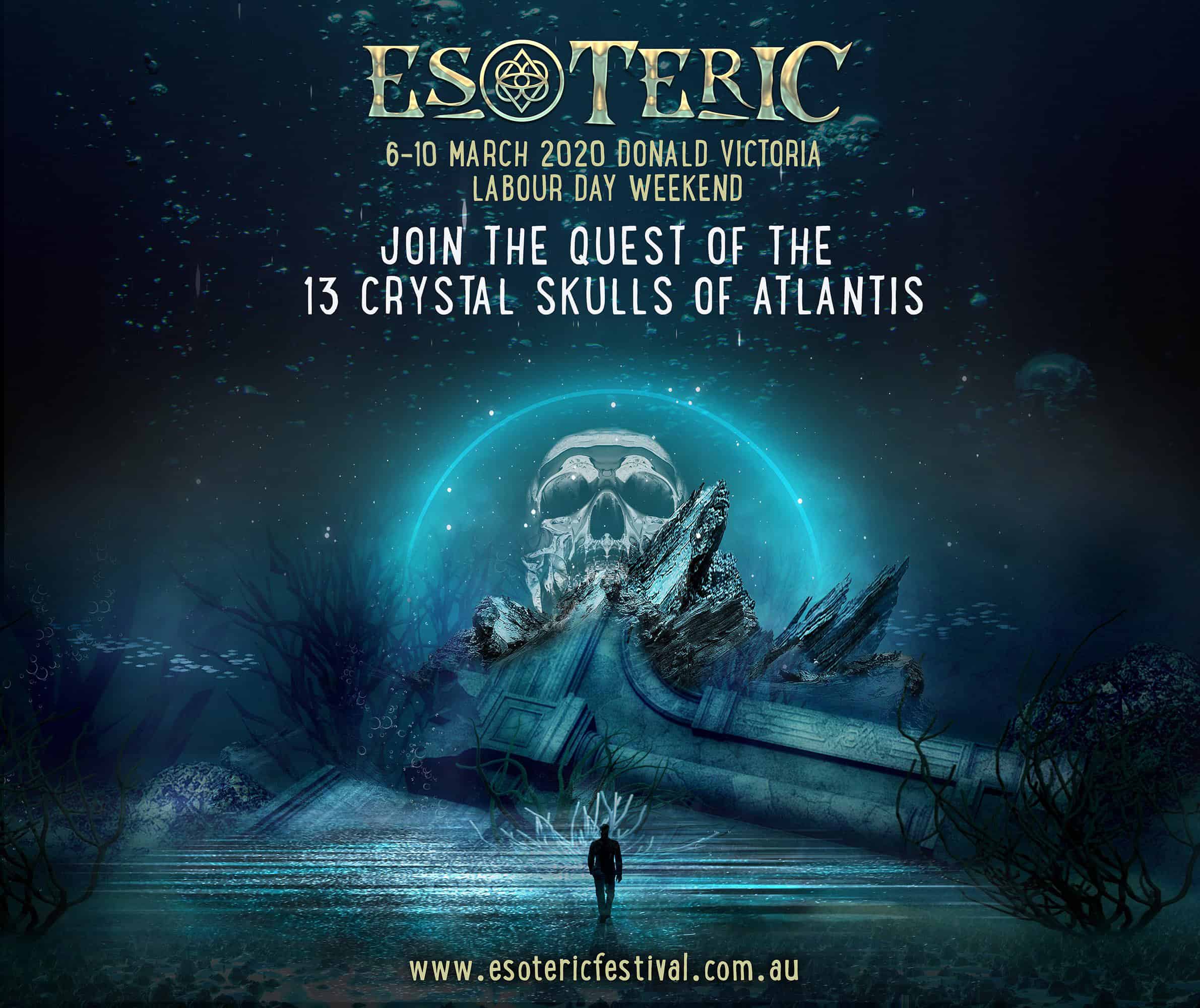 In Ancient times, thousands of years ago, one civilization possessed technology so advanced that even today it would seem like magic. They affected the world around them to such a degree that legends still echo through almost every culture- whispers of The Fabled City of Atlantis.

With a lifespan far beyond the average human, The Priest King of the Atlanteans- Thoth, was hailed as the God of Wisdom by their closest cultural counterparts, the Egyptians. The Atlanteans recognised the path the rest of the world was heading towards- dark ages of survival and violence- and chose to retreat from the rest of humanity. Using the combined power of their society, they receded beneath the ocean waves to live in peaceful, utopian isolation.

The King chose to stay behind to leave a key for the future seekers of truth from the outside world. The Emerald Tablet of Thoth was engraved with the Universal Truth, the Hidden knowledge of the self, and the Keys to access the Utopia of Atlantis.

In his wisdom, the King smashed the Tablet into Thirteen pieces. Each of these were carved into the shape of a human skull and given to a different civilisation in order to prevent conflict. Each skull represents a different practice for the ascension of humanity. Once all 13 keys are embodied, the secrets that allowed Atlantis to thrive can be applied to the modern world.

The legend goes anyone able to locate the Thirteen Crystal Skulls, and master their teachings, will earn the respect of Thoth and wield the power to access the Utopia of Atlantis.

For the past 2 years the High Council of Shangri La held a treasure hunt at eso, but this year we are giving the quest a serious upgrade to make it more interactive than ever before.  Here is what our past eso explorers have had to say about the quest:

“I’ve never had an experience like this- I’m so grateful. This is my first bush doof and you made my experience so amazing. I love you guys, Thank you.” – Shanna

“To the High Council, Thank you for this magical adventure through the enchanted forest at Esoteric. It will be locked in my mind for this lifetime and beyond. Lots of Love” – Esther

“You are the heart of the festival! Can’t wait to see you next year” – Cam

“Not only was this quest was amazing, and the idea behind it, but also the journey that you take people on. I’m not the best at expressing myself through writing, and find it even more difficult trying to describe with words indescribable emotions. More than the quest, it’s the way you activate the space and interact with everyone that I find so special. Your contributions to the doof are beyond words, and the thought, effort, creativity and time that goes into creating this experience is beautiful. I am so grateful for each one of your existences and want to thank you so much for helping me deeper understand how important play is, and what we can bring in to this reality from our imagination. We manifest our own reality, and damn, isn’t this one just beautiful- just like each one of you Magical, Fairy tale characters. So much Love” – Sam.

“Thanks, and thank you! A sense of adventure Following the clues and signs Solving the riddle Learning the mysteries. Making new friends. Feel the magic” – Christos

“You guys have brought a magic to my life that I didn’t know I was searching for and I’m forever grateful to Mumma Universe for bringing the gift that is The Council. You are incredibly powerful lights and I’m forever grateful for shaping me into the person I am today (after last year)! LOVE YOU GUYS TO THE STARS AND BACK! <3 <3.   Take a piece of my heart (one for each of you) so I can try to give back some of the love you guys have brought in to my reality!” – Bella